Have you ever browsed Facebook and wondered why everyone seems to be living such a fantastic life?

They’re always happy, always doing something interesting and you can’t help but think to yourself: “Why is my life so lame and boring?”

Here’s a newsflash for you:

It’s not that your life is lame and boring, and it’s certainly not that you’re unusually miserable compared to everyone else.

It’s that people are living fake life on social media.

Why are people so fake on social media? 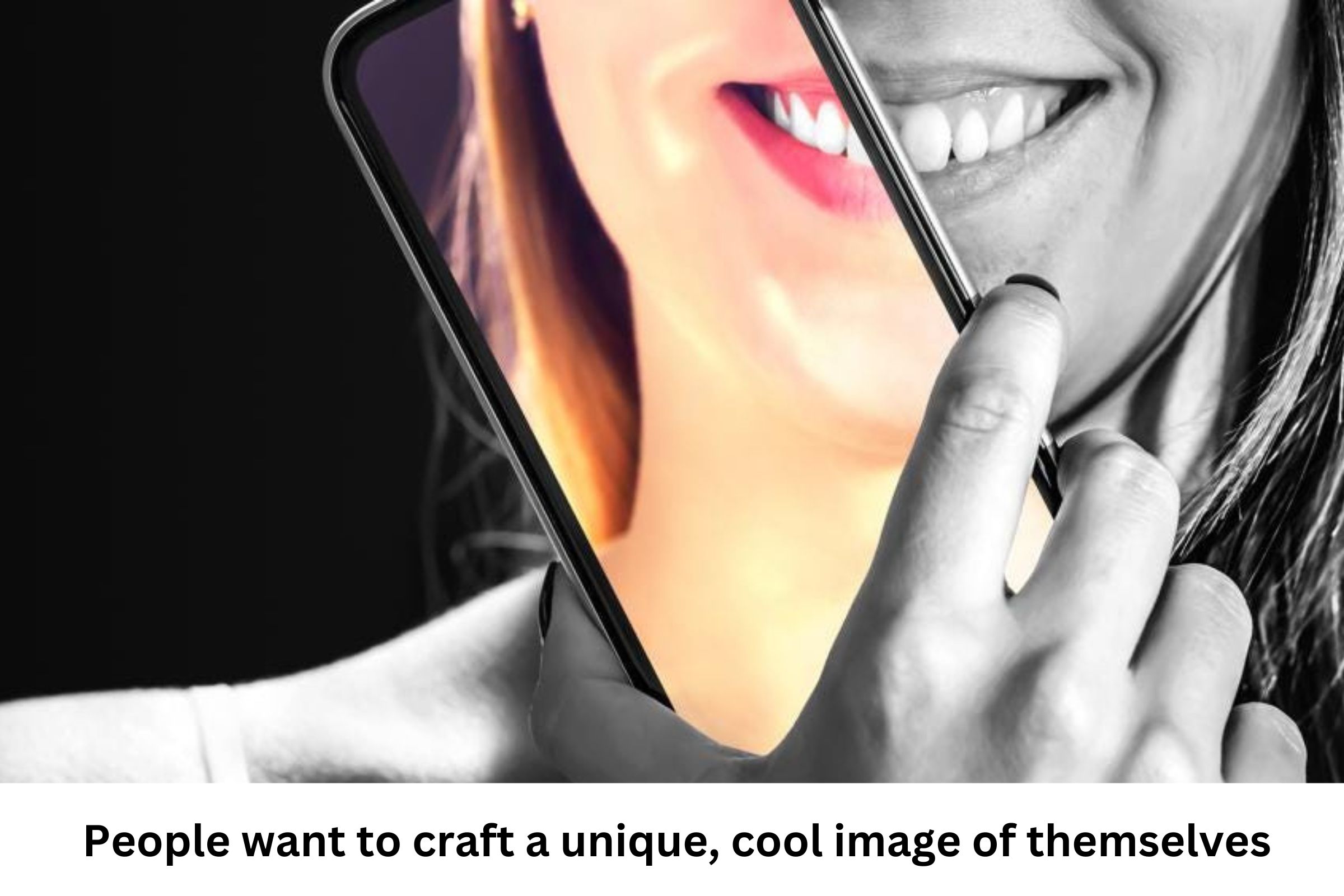 1. People want to craft a unique, cool image of themselves

The beauty of social media is that you craft the image of yourself you’ve always wanted.

You can embellish all the great things going on in your life while ignoring the not-so-great things.

You can show the photos where you look cool and beautiful and make sure to untag yourself from any photos that aren’t so beautiful.

We can do this because social media gives us complete control over what we want to show.

There are no random circumstances out of our control that test our true character like there are in real life.

There is no one to interact with face-to-face.

Even messaging someone on social media gives you time to craft the perfect response.

Is anyone going to reveal all the bad and miserable things about themselves on social media?

This is why social media is often about people’s “highlight reels” rather than what’s really going on in their life behind the curtain.

And it’s absolutely futile to compare your real life with someone’s highlight reel.

You’re never going to compete with a perfectly crafted image someone has created on their Instagram or Facebook profile.

Everybody wants to be popular, or at least, to be accepted by others.

Humans are social beings, and it has always been important evolutionarily speaking for us to not be cast aside by the group.

But this usually consisted of a small tribe or group.

It certainly has never been normal for humans to seek approval from thousands or millions of people, but that’s exactly what is happening with social media.

And this can lead to some seriously odd consequences.

When you hear stories about people risking their lives leaning out of train windows on an overpass for the perfect Instagram shot, you know things have become really bizarre.

People have become obsessed with seeking approval from millions of strangers, and this has led to, you guessed it, people creating an incredibly fake persona.

“It amazes me that we are all on Twitter and Facebook. By “we” I mean adults. We’re adults, right? But emotionally we’re a culture of seven-year-olds. Have you ever had that moment when are you updating your status and you realize that every status update is just a variation on a single request: “Would someone please acknowledge me?”

Doesn’t it seem like more superficial and materialistic people use social media?

I know it does for me.

If you don’t know what I’m referring to, I’m talking about people who care more about money, possessions, and status symbols, than integrity, authenticity, and anything real.

Too much social media use is usually a red flag in dating for me.

But when you think about it, it’s not surprising that materialistic people are also the types of people that check their phone every few minutes to see whether their latest social media post has received any likes.

These people tend to seek status and approval from others, and social media is an easy way for them to get it.

Materialistic people don’t have a genuine sense of identity and purpose. They just want to be popular.

Social media is tailor-made for a person like this!

And this is why social media seems so fake because materialistic people with no depth tend to dominate what we see.

Meg Jay eloquently explains why social media is really set up to “seem” rather than “be”:

“Despite its revolutionary promises, Facebook can turn our everyday lives into that wedding we have all heard about: the one where the bride chooses her prettiest friends, not her best friends, to be bridesmaids.

It can feel like a popularity contest where being Liked is what matters, being the best is the only respectable option, how our partners look is more important than how they act, the race to get married is on, and we have to be clever all the time. It can be just another place, not to be, but to seem.”

4. People are trying to live up to a fake image

We can blame social media and the media in general for this.

We’re consuming more online media than ever, and we’re constantly seeing stereotypes in the media.

Inevitably, people think those personas are cool and relatable, so they try to live up to those stereotypes.

They adopt the outer mannerisms, accents, styles, and beliefs of a certain type of person they want to be, not realizing that this isn’t really them.

This doesn’t just play out in social media, but in real life as well.

The difference is that it’s easier to spot when it comes across as fake in real life, but it’s much easier for someone to fake that persona on their social media profiles.

But the goals are the same, whether it’s in real life or on social media. They want to live up to the stereotype the media has drilled into their minds.

And this is also the case with advertising on social media. Social media has more ads than ever. That’s how these platforms make money.

What do ads want? Easy: consumers.

Fake people are often the products of high-level social engineering and marketing that’s made them into a certain type of demographic almost without them realizing it.

“Forty-something married homeowner with an interest in cars? Ha, I can sell to those guys in my fucking sleep, man.”

Advertising has become so advanced on social media that you can literally pinpoint your desired customer.

When you fall into the kind of “type” that a marketing big brain created you to be at the end of a boardroom table you end up losing a part of yourself.

Without even realizing it in some cases, you start trimming parts of yourself and your interests, quirks, beliefs and dreams in order to fit what you think you’re “supposed” to be.

But the thing is you don’t have to buy that latest v-neck sweater, tank top, or flashy sportscar.

And even if you do it’s only one part of who you are, not some kind of whole “package” you have to fit into because some marketing firm thinks you do.

Fame is a powerful drug. Everyone wants to be famous (well, at least, that’s what it looks like on social media).

And the trouble is, social media has become a legitimate way for someone to get famous.

When you’re looking to get fame, “clout” or social popularity there are many lengths you will go to.

One reason so many people on social media these days seem faker than ever is that our celebrity-obsessed culture has turned them into attention hawks with no appreciation for life or other people.

They’d practically let their family go homeless if they could create a “post” that goes viral.

“I deserve x, I deserve y” are the words of a fame-seeking attention whore.

Does it surprise you to know that this sort of person tends to be just a little on the fake side?

And these are people who are getting the most impressions on social media platforms!

7. There is a lack of compassion on social media

Everybody is a stranger on the Internet. There is no real face-to-face connection.

And when you can’t talk to someone face-to-face, you tend to lack compassion for them.

After all, they’re just an avatar on a screen.

They don’t really care about anyone. There’s no authenticity, empathy, compassion, you know, genuine emotions that make us human.

And the bottom line is this:

You can’t form a real connection with someone unless you can actually talk with them face-to-face.

Life is boring for a lot of people. You go to school, get a 9-5 job, start a family, but many people have a feeling that they’re not living an exciting life.

And seeing as though their own life is not exciting, to make themselves feel better they decide to fool everyone with an “amazing” and “fun” life on social media.

What better way to impress your friends from 20 years ago than by pretending you’re rich and you’ve made it on social media?

As we’ve said above, it’s easy to fake a life on social media, so most people do it to get away from their own boring life and impress people they haven’t seen in years.

9. You don’t get rewarded on social media for sharing your vulnerable side

There really isn’t much reward for sharing with others how difficult your life is.

In reality, social media is probably a dangerous place to share too much about yourself because people on the internet are mean.

They’re not talking to you face-to-face so they feel like they can judge you however they like without repercussions.

Furthermore, sharing how miserable you are in real life is bound to turn off future employers.

After all, browsing social media profiles seems to be part of the job process these days!

10. We all naturally compare ourselves to others

It’s almost human nature to compare ourselves to others. We all do it.

And social media is the perfect place to outdo your competition.

All you have to do is show that you’re successful through fake status updates and fake photos.

We do this to feel better about ourselves. If we’re living a life that other people envy, then we’re doing a pretty good job in our lives, right?

So most people think:

“If I want to show that I’m living the life of my dreams, then why not share the photo I took 6 months ago incredibly happy standing in front of the Eiffel tower?”

It’s all fake and it doesn’t mean anything, yet so many of us take social media seriously.

In reality, it probably only gives us a small dopamine boost when we get lots of likes on our photos, but this small boost makes us do it again and again.

How to Use Social Media to Spread Positivity and Improve Mental Health: 5 Tips

While social media might produce plenty of “fake people”, it doesn’t mean it’s all bad.

It really just depends how you use it (and what you ignore).

Social media has taken the sharing of knowledge to an entirely new level and the truth is that when the printing press came to be, people were ready for more information; at this point, we’re inundated with so much information we often don’t know what to do with it.

And it’s overwhelming in all the wrong ways.

In this article, we’re going to cover some of the best ways to curb the impact of social media on your mental health and help you use social media to spread positivity instead.

What Are Wegovy Side Effects?